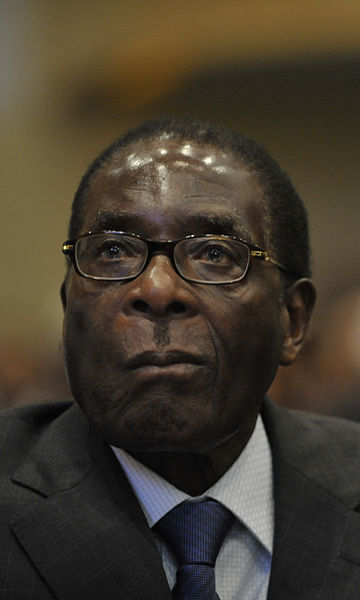 Zimbabwe can no longer use its own currency. An image of Robert Mugabe in 2009. Courtesy of Jesse Awalt

The last decade and a half of Zimbabwe’s history has been particularly adverse for the vast majority of Zimbabweans on both sides of the racial divide. The reasons for this are multiple and vary in degree of severity. This being said, there is a generally accepted conglomeration of factors that can be seen to be central to the failure of the Zimbabwean economy. Major factors include the tyrannical practices of the ruling party, the chaotic seizure of productive farmland owned by politically disempowered whites, drought, economic sanctions against Zimbabwe, the central bank printing local currency, and the self-enrichment of ZANU elite at the expense of sound, rational executive decision making processes.

The proverbial “vegetable seeds” that gave rise to Zimbabwe’s rapid descent can be found in the poor management of the land issue. The issue of land ownership is a politically sensitive issue in a post-colonial context, and even looking for houses for sale in Pretoria constitutes a political act. In most African nationalist thought, white land ownership in Africa is an illegitimate remnant of the colonial catastrophe, and as such, is a problem that needs to be solved. Distributing white land amongst black citizens is the popular answer to the land question, and the original post-independence constitutions of South Africa and Zimbabwe indicate that the fairest land programme would be dealt with in a “willing selling willing buyer” dynamic. Public funds (tax money) would thus be used to buy land that would then be allocated to private black individuals. The cost of changing the racial profile of land ownership would therefore be carried by the tax paying population at large. This system would protect market prices and, by extension, economic stability and investment (both domestic and foreign). The political dimension implied by guaranteeing white property is that the white citizenry is protected by the same laws that protect black owned property. In this way, continuing systemic and legally entrenched racism is avoided. By 1997, the ZANU regime had done very little with regards to successfully addressing this political hot potato; by 2000, the government implemented the popularly supported seizure policy, which had the unfortunate effect of allocating productive commercial farms to inexperienced subsistence farmers. ZANU elite also landed up owning numerous farms, adding large amounts of property to their personal asset list. To place the market effects of land seizures into a different context for the purposes of demonstration, it could be compared to a complete market meltdown: imagine the effect on the local micro economy if all the property for sale in kleinmond, to use an example, lost all value overnight…

The economic knock on effects of the scramble for white land were far reaching and devastating. Agricultural exports constituted the bulk of exports, thereby earning foreign currency to pay for imported goods. With a shortage of foreign reserves, the Zim Dollar lost ground on foreign currencies, pushing import prices through the roof. The sudden inflation shocks were only augmented by the economically suicidal decision to print money. By simply putting more local currency into circulation, the real buying power of Zimbabweans actually diminished as prices of basic goods and fuel went into hyperinflation (before the inflation went into technical free fall, it was at 12 million %). The supply of locally produced food products decreased, while prices only increased. Added to these financial woes was/is sanctions brought against the ruling party for gross violations of human rights and corrupt election practices.

Despite two years of economic growth, the short term outlook for Zimbabwe is still bleak as Robert Mugabe and his ZANU inner circle remain in power, continuing to implement policies that increase personal wealth while desecrating the well-being of the society at large (for example, “indigenisation” of businesses means that disinvestment will continue to plague the economy). In the long term, however, it is hoped that this once productive and stable country will regain its footing and sustain a stable economy and society.